In the study “Medium-term forecast of electricity supplied to final consumers in Germany for the calendar years 2019 to 2023”, Fraunhofer ISI determined how much electricity is supplied by energy providers and required by the so called final consumers. These final consumers can be divided into self-consumers of electricity (certain solar panel owners etc.), electricity-intensive companies and other consumers. The costs for refinancing renewable energies are split among these consumers based on the electricity used. These surcharge payments are regulated in the German Renewable Energies Act (EEG).
The analyses showed a declining net electricity demand; this falls by 1.8 Terawatt hours (TWh) between 2017 and 2019 due to increased efficiency, among other things. Anna-Lena Klingler, who coordinates the project at Fraunhofer ISI, cites other findings from the study: “For 2019, we forecast a moderate increase in electricity self-sufficiency to about 67 TWh, i.e. a rise of about 1.4 percent compared to 2017. This is mainly due to the installation of photovoltaic systems in private households. Using combined heat and power (CHP) to self-supply electricity remains relatively constant due to complex legislation and comparatively low funding. However, existing plants are increasingly being modernized and replaced: in 2019, a proportionate surcharge will be paid for 3.4 TWh of self-generated power, 2.5 TWh of which is for power from CHP plants.” 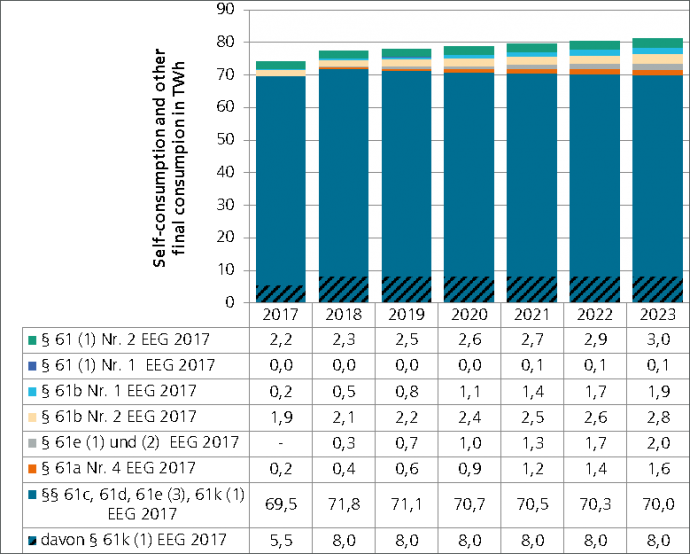 Developtment of self-consumed and other final consumption according to the German Renewable Energies Act § 61 EEG 2017 for 2017 to 2023.